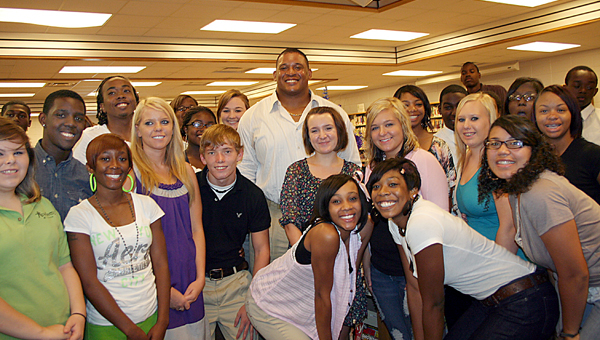 Cornelius Griffin poses with members of the Business and Finance Academy at Pike County High School on Wednesday. Griffin talked with the students about being successful. (Photo/Jaine Treadwell)

Griffin challenges academy students the ‘pay the price’ of success

Retired NFL star Cornelius Griffin is not so far removed from high school that he doesn’t remember that it often takes some pounding to get a message through to kids.

Griffin made sure that his message got through.

“The price of glory is high,” he told the students in the Business and Finance Academy at Pike County High School Wednesday morning. “You will always pay a price for success. You won’t know what the price is going to be but you will pay the price.”

To be successful at anything, Griffin told the students that they must set goals, work hard, be dedicated and know right from wrong “and never forget it.”

Griffin was a standout football player at Pike County High School and at the University of Alabama. He played 10 years in the NFL with the New York Giants and the Washington Redskins and is now a successful Pike County businessman.

Griffin contributed much of his success to attitude.

“We each choose our attitude,” he said. “I choose a positive attitude. There have been stumbling blocks along the way but I never accepted defeat. You have to set goals and then you can’t compromise. If you do, there are consequences.”

As a student at PCHS, Griffin said he was satisfied to be a C student.

Griffin had the talent, the drive, the work ethic and the right attitude to go to a major college right out of high school but he first had to prove himself, academically, on the junior college level.

He went with a positive attitude and worked extremely hard. As a result, he was a two-time junior college All-American. Griffin prepared himself to be successful on the college level and, then, the professional level.

From that time forward, Griffin has not compromised his goals. His dedication and hard work are now translating into success in the business world.

“Do things the right way but, if you don’t, then do them over until they are done right,” he said. “Don’t leave school the way you came. Get better at something every day. Always give it your all. Pay the price.”

Griffin told the students to always go beyond what is expected of them.

“Be willing to pay the price for what you want to achieve but you can’t put it on a credit card and pay it later. You have to pay up front.”

Griffin was the first of an impressive group of monthly speakers who are being scheduled to speak to the Academy students.

The monthly programs are hosted by the Business and Finance Academy sponsor First National Bank of Brundidge.