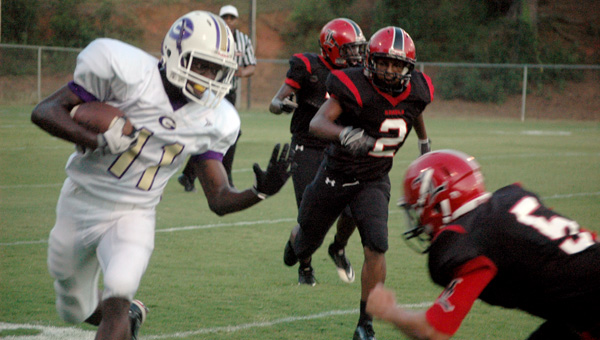 SKIPPERVILLE – The Goshen Eagles looked more like a baby chick in the path of a boulder rolling downhill.

G.W. Long pounded Goshen on the ground en route to a 48-20 victory in Skipperville Thursday night.

The Rebels rolled up 389 yards rushing and did not attempt a single pass in the game.

Zach Walker shredded the Eagles defense racking up 187 yards on 11 carries with a touchdown. Walker also returned a kickoff 90 yards for a score in the third quarter.

Quarterback Jerome Lawrence never could quite get the passing game going for the Eagles completing just 3 of 14 attempts but did have a 16-yard scoring strike to Brandon Alford early in the fourth quarter.

Reginald Foster carried the ball 16 times for 125 yards and a touchdown.

Goshen struggled to stop Long early falling behind 21-0 at the half.

The Eagles showed some fight coming out of the intermission, scoring on a 13 play 70-yard drive capped by a 2-yard run by Foster. The extra point was missed making the score 21-6.

The Rebels would punch back, however, with Walker’s kick return to pull ahead, 28-6.

Goshen, on the ensuing drive, would again find the endzone. After a 52-yard run by Foster to the Rebels 2-yard line, Lawrence carried around the left end for the score. This time the extra point was blocked and Long controlled a 16-point lead.

The Eagles seemed to gain some momentum when Anthony Rogers forced and recovered a fumble to end a G.W. Long drive at the Eagles 5-yard line. The momentum would not last long, however, as Lawrence threw an interception two plays later to hand the ball back to the Rebels. After the return placed the ball at the 1-yard line, Long wasted no time reaching pay dirt taking a 34-12 advantage.

“We knew we were young at linebacker and that showed,” Snyder said.

“We made mistakes that we can fix and we’ll get to work next week in correcting those mistakes.”

Goshen will host perennial 2A powerhouse Elba next week in a pivotal region matchup early in the season.