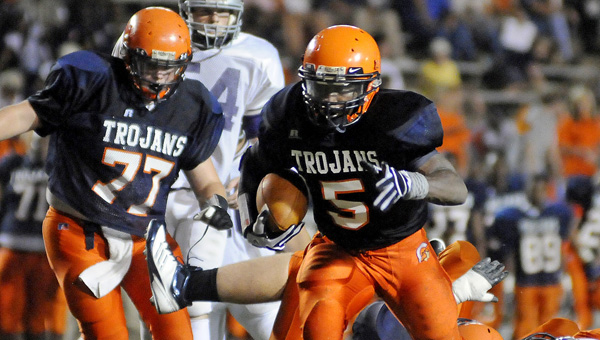 Charles Henderson head coach Hugh Fountain expected the running game to be key for his 2011 Trojan team. Courtney Downing and Stanley Crawford both proved they could carry the load Friday night. The duo rushed for over 250 yards in carrying the Trojans to a 27-0 victory over cross-county rival Pike County in the Pike County Classic.

Downing, who is expected to be the Charles Henderson starter, carried the ball 22 times for 156 yards and a touchdown. Crawford, not to be outdone, rushed 17 times for 100 yards and two scores.

“We know both of these guys can carry the ball,” Fountain said. “We wanted to see how good of shape they were in and how long they could go at a time.”

That test began early as Fountain dialed Downing’s number six consecutive plays on the Trojans opening drive. The junior gained 37 yards on those carries. Pike County would halt that drive, however, by intercepting a Joe Bradley pass at the 1-yard line.

Pike County would run three plays and punt. After a poor punt from the Bulldogs, Charles Henderson scored on a 1-yard plunge from Downing capping a six-play drive.

Pike County quarterback Marlon Meadows connected with Quandry Greasham for 25 yards on their ensuing possession but dropped passes forced the Bulldogs to turn the ball over on downs.

In the first half alone, eight of Pike County’s 11 incompletions were the result of drops.

After Charles Henderson failed to convert a fourth down, the Bulldogs moved the ball down to the Trojan 26-yard line before freshman Richard McBride stepped in front and picked off of a Meadows pass at the 18.

Crawford carried four times advancing the ball 42 yards. On the fifth play of the drive, Robert Lee ran a swing route from his slot position. Bradley hit him in full forward stride and no one touched Lee as he raced 40 yards to give the Trojans a 14-0 lead. 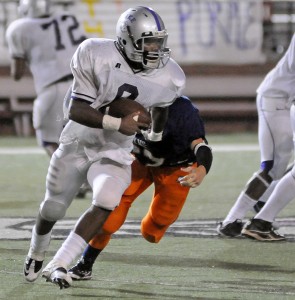 Coming out of halftime Fountain wanted his Trojans to use their speed as an advantage against the Bulldogs. It didn’t take long for that to happen as Ernest Downing return the second half kick 60 yards to the Bulldog 26. Four plays later Crawford had his first score on a 6-yard run. The extra point was missed but the Trojans owned a 20-0 lead.

Things would only get worse for Meadows and the Bulldog offense in the second half. Meadows would complete only two passes in the final two quarters while Pike County would not cross the 50.

“We came out trying to spread them out,” Pike County head coach Rodney Dollar said. “We had protection problems and when Marlon did get rid of it we couldn’t catch it.”

Meadows was 10-for-26 in the game for 106 yards with the one interception.

Greasham received six of those offerings for 65 yards.

Late in the fourth quarter after another shot Bulldog punt, the Trojans took over at the Pike County 35-yard line. Again, Downing and Crawford pushed the ball towards the endzone with Crawford scoring for the second time on a 1-yard run.

Crawford would average 5.9 yards per carry on the night while Downing averaged an incredible 7.1.

“We were determined to run the football tonight,” said Fountain.

Aside from Downing and Crawford, Fountain said he was looking for a third back and saw a few of his options Friday night.

Bradley finished 3-for-7 passing for 64 yards a touchdown and an interception.

Fountain stressed to his players about the fundamentals all week and feels his team’s performance was adequate.

“We played good at times and poor at times.”

“We had several turnovers and mental mistakes that we will work on this week.”

Charles Henderson will hit the practice field in preparation for their season opener against Beauregard Aug 26.

On the same night Pike County will travel to Notasulga to take on the Blue Devils.

Both games are set to kick off at 7 p.m.