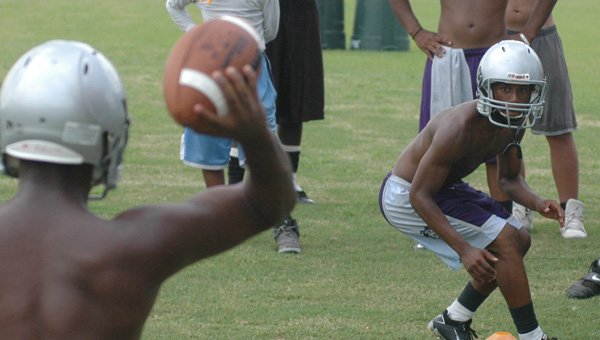 BRUNDIDGE – Pike County may be placing more emphasis on physicality and the running game but there is no question the Bulldogs will be loaded at the skill positions offensively in 2011.

Marlon Meadows returns as full-time starter for Pike County after splitting playing time with Jerelle Bailey a year ago.

Meadows has been praised by his coaching staff all summer and seems to have real grasp for the offence.

“He is a good athlete who knows the offense,” head coach Rodney Dollar said. “He’s like having a coach on the field.”

Dollar will use a lot of the Wing-T that the Bulldogs grew accustomed to in 2009 and 2010 and Meadows should flourish in the system in 2011.

Tyshin Dawson will lead the Bulldogs’ hard nosed rushing attack. The 5-7, 108 pound senior was a mainstay in the Pike County backfield last year and will be looked upon to carry the load this season.

Anthony Griffin and Raheem Pearson will also see carries for the Bulldogs and add some shiftiness in relief of Dawson.

One weapon Bulldog fans could see a lot of is 5-5, 200 senior Dominique Mills. Mills is expected to start at the fullback position but can wear defenses down when needed.

Quandry Gresham will be one of Meadow’s prime targets downfield in 2011. The senior has drawn interest from some college programs and will be sure to draw attention from opposing defenses.

Sophomore Berdex Starks (6-4, 190) can be a big target for Meadows as well from the tight end position.

“We’ve got some guys that can be explosive for us,” Dollar said. “Obviously we have to block well and do the little things but the talent is there.”

The line assigned the job of leading the offensive charge is headed by seniors Bishop Caple and LaCori McGuire.

With all the explosive talent, the Bulldogs may be primed to make another deep run into the AHSAA playoffs.

Pike County will put that talent on display Aug. 19 when they travel to Troy for the annual cross-county rivalry game against Charles Henderson.