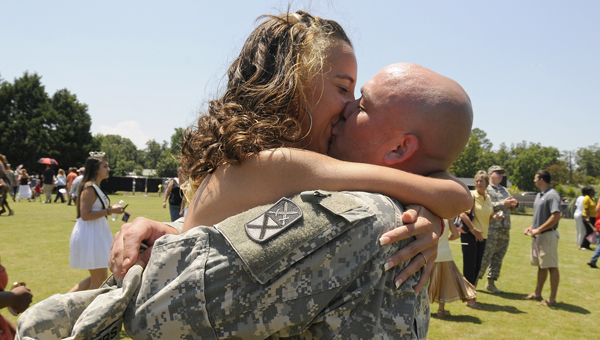 Martha Garcia, left, and Drake Sanders kiss after a homecoming ceremony for the 900th Maintenance Company in Brundidge, Ala., Friday, Aug. 12, 2011. The 900th returned from a one-year tour of duty in Afghanistan. (Messenger Staff Photo/Thomas Graning)

The Alabama National Guard unit has spent a year in Afghanistan as part of Operation Enduring Freedom.

The first hint that the convoy bringing the soldiers home was signaled, in true Southern fashion, “Yonder they are! Comin’ down the street!”

Cheers went up at the sight of the first bus and then the shouts grew louder with each following bus. When the “Freedom Riders” marched onto the field a tremendous roar of appreciation filled the stadium.

But it was the sighting of, as Peggy Grissette, said, “our boys coming home” that brought the tears of joy. 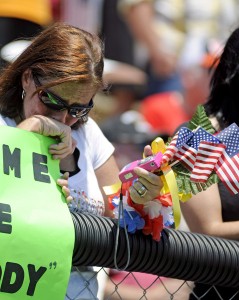 A supporter cries during a homecoming ceremony for the 900th Maintenance Company in Brundidge, Ala., Friday, Aug. 12, 2011. The 900th returned from a one-year tour of duty in Afghanistan. (Messenger Staff Photo/Thomas Graning)

And, more than a few tears had filled the eyes of the soldiers as the convoy made its way down Main Street in Brundidge.

“It was emotional,” said Al Davis. “For all of us it was emotional because we were finally home. And, yeah, a few tears where shed.”

Those emotions, those tears were held in check as the soldiers of the 900th marched into the stadium and stay in formation while they were welcomed home by Brundidge Mayor Jimmy Ramage and Phenix City Mayor Sonny Colter. The unit is comprised of soldiers from both cities.

Ramage said that Brundidge has long been a “guard” town and expressed appreciation to the soldiers for carrying on the proud patriotic tradition that is the trademark of the 900th Maintenance Company.

“We welcome you home and commend you on a job well done,” he said. “Homecoming. There’s nothing as highly anticipated and as heartwarming as to come home to those you love and those who love you.”

“This is a special time of homecoming for our soldiers. Actually, coming home to those who love you, care for you and have waited a long year to ‘get their hands on you again,’’’ said Colter.

But the soldiers had to wait just a little longer for that.

Maj. Gen. John Harkey had a few words to say to the soldiers about their service to country.

The 900th left for Operation Enduring Freedom on Aug. 8, 2010, and Harkey said they left with the confidence that they could do the job before them.

“The mission went well,” he said. “The mission was a success and a perfect accomplishment. The 900th completed 335 logistic patrols totally a half million miles. Thirty-nine of the soldiers were awarded combat action badges.”

Harkey said the 900th was commended by the Army’s 82nd Airborne and the 101st Airborne for its outstanding support under their commands.

To that a cheer went up from the crowd. 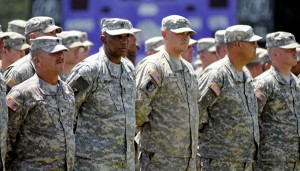 Troops are seen during a homecoming ceremony for the 900th Maintenance Company in Brundidge, Ala., Friday, Aug. 12, 2011. The 900th returned from a one-year tour of duty in Afghanistan. (Messenger Staff Photo/Thomas Graning)

Company Commander Joseph Harmon said that people often have in their minds what a soldier looks like.

With that he addressed Harkey.“Mission complete, sir. Soldiers dismissed.”

The soldiers then were released to the love and caring of their family and friends.

Larry Revels said they had been in a different world and it was an honor to serve and a blessing to be back in the greatest country in the world.

The Alabama judicial system is operating is crisis mode and that means that changes must be made in the Pike... read more