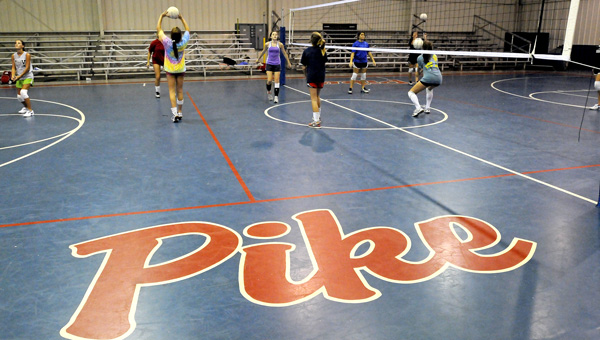 Pike Liberals Arts’ volleyball team is gearing up for the 2011 season. Head coach Mindy Avant feels that her team has come a long way from last year’s 12-15 season.

Youth is the one thing the Patriots have. Of the team’s 14 players Pike will dress out only one senior.

Experience and leadership are what coach Avant is looking for and her lone senior may be able to provide that. Jaylan Reynolds transferred to Pike after playing club ball while being home schooled.

“I hope I can help the team with some of the things I’ve learned playing club ball,” Reynolds said. “I think this can be a good team.”

Avant will also be looking to two underclassmen who had solid seasons last year. Sophomores Marlee Tunstill and Kailee Taylor return for the Patriots and look to lead Pike into the 2011 playoffs.

“The both had a nice season last year and I’m looking for big things from them this year,” Avant said.

While Avant was encouraged my this year’s improvement she still feels this team is a work in progress.

“We do a good job setting the ball and passing the ball, we just need to get better at the net and finishing.”

Pike’s varsity team may be working out some kinks but the junior varsity team is coming off a runner-up finish in the state tournament last year.

Reynolds has been impressed with the younger players in her short time with the Patriots.

“They are a good group,” said Reynolds. “They are fun to watch.”

The varsity squad is also one to watch for with the merging of new upperclassmen experience and underclassmen talent. Reynolds says the Patriots could very well make a postseason run.

“We’re getting better everyday, I think we can be a good and surprise some people.”