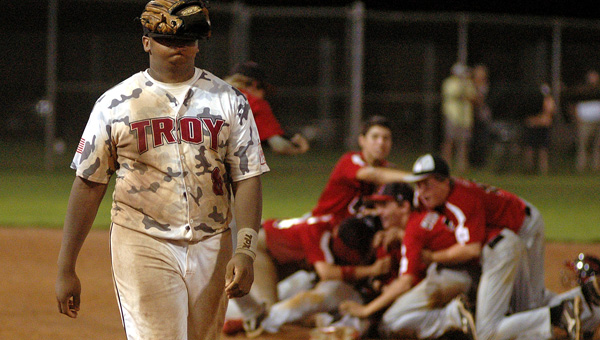 ENTERPRISE –Plain and simple, it was one of the greatest games a fan could have ever witnessed. Troy was coming off a 5-1 defeat in the first championship game, their first of the postseason. A World Series berth was on the line and both of these teams played like there was no tomorrow. With a loss each, there wasn’t.

Opelika came out of the dust with a 10-9 victory over Troy in 10 innings, securing their place in the Dixie Boys World Series in Beaufort, S.C.

It was truly a game for the ages, with six lead changes and five ties.

Opelika scored in the first on a passed ball. Troy would tie the game in the second when Chase Hartley picked up an RBI single to score Cole LaBrant.

In the third, an Austin Ingram singled and Xavius Burden walked before Reilly Fox drove them both home with a double. Fox would also score in the inning giving Troy a 4-1 lead.

Troy wouldn’t stay ahead long as Opelika answered for three in the bottom half  on three singles off of Burden and a bases loaded walk. Hartley relieved starter Burden in the fifth.

Jason Fleming’s sacrifice fly scored LaBrant in the fifth and again put Troy ahead, 5-4, and again, it wouldn’t last long. Opelika picked up an RBI single to square things at 5.

Believe it or not, that’s when the game started to heat up.

Fox was hit by a pitch to lead off the seventh and quickly stole second. Devin Hooks laced a 2-2 pitch into center to drive in the go-ahead run. Opelika responded with a two-out single to send the game into extra innings.

Troy thought they had delivered the knockout blow in the eighth. Hunter Baggett singled with one out, stole second before Rush Hixon delivered a bullet of a double into left field. Troy wasn’t done, however. One pitch later Ingram slammed a fastball deep into center for a 2-run homerun. Troy then led 9-6.

Opelika seemed to be out of gas as their first two batters fell quickly. With Troy one out away from advancing, Opelika came bursting from the ashes. Two singles and two doubles later, Opelika had Troy on the ropes as they tied the game and had the winning run on second.

As another base hit rolled over second base and into center, Hixon scooped it up and fired a rocket to plate cutting down the run and giving Troy’s pulse another reading.
Head coach Gary Fox said after the game that he thought about removing Hartley after Opelika tied the game.

“I thought about it but then I thought back to last year’s World Series when he dug deep and really came through for us,” he said.

Both teams would go scoreless in the ninth and Troy in the top of the tenth.

Opelika didn’t waste any time as Walker Meadows led off with a double and two batters later Cody Puckett drove him home with a single.

“They beat our top three pitchers,” Fox said. “You’ve got to give them credit they were a good team.”

In game one, Troy left 13 runners on base, nine of which were in scoring position as they fell to Opelika 5-1.

Ingram went the distance on the mound for Troy and scored the team’s only run with a solo homerun in the fifth inning.

Troy and Opelika collected 10 hits each. Six of Opelika’s hits came from the top four hitters in their line-up.

Opelika broke a scoreless game in the third with three 2-out runs then added another in the fourth on consecutive doubles.

Troy would threaten in the bottom half when Hartley and Hooks walked. Jason Fleming then hit a shallow single to load the bases. Opelika would get Troy batters to pop out twice to escape any damage.

Ingram’s one-out homer in the fifth made the score 4-1 and gave Troy a fresh breath.

Troy again loaded the bases in the sixth, this time with no outs. Baggett flew for the first out then Hixon hit another fly medium depth to center. Hooks tagged up and appeared to score but after an appeal, umpires ruled he left early and was ruled out to end the inning.

Opelika scored their fifth run in the seventh on a double and a Troy fielding error.

Ingram picked up his third hit to lead on the bottom half and Burden followed with a walk. Fox grounded into a fielder’s choice before Hartley and Hooks went down on strikes to end the game.

“We just didn’t hit with runners on base,” Fox said.