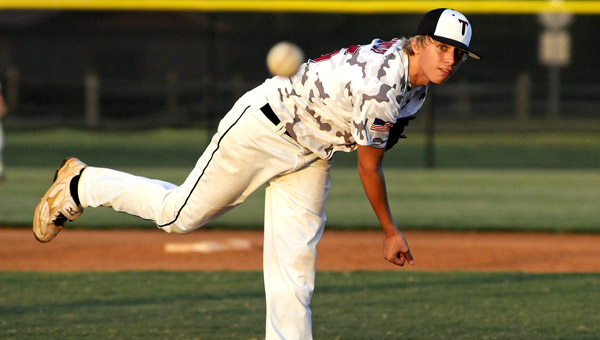 If attitudes are contagious, the city of Troy should prepare for an epidemic.

Dixie Boys head coach Gary Fox has a group of 14-year-olds infested with attitude, and it’s just the kind of attitude he likes.
Determined, intelligent, and relaxed.

“We’ve got a target on our backs this year but these guys want to get back to the World Series really bad,” Fox said.

Fox wanted his boys to understand the challenge that faced them so he designed t-shirts with a large bull’s eye on the back and “One pitch at a time” on the front.
Fox led the same core group to the Dixie Junior Boys World Series last year finishing in fourth.

“The competition is tougher this year and teams will be gunning for us. Coach (Chuck) Ingram, Coach (Brett) Stallworth, and I have stressed playing ‘one pitch at a time’ and doing the little things well.”

Chemistry might also be a term often used around this team. Their chemistry is the main reason center fielder Rush Hixon feels his team plays with such confidence.

“We play well together,” Hixon said following Troy’s 16-2 opening round win over Crenshaw County in the district tournament. “We pull for each other and want to win as a team.”

Hunter Baggett knows the task at hand. He has his sights set on reaching his goal of winning the state tournament.

“Once he (Austin Ingram) got on base I knew we would score,” Baggett said after his game-winning RBI single that scored Ingram to beat Dothan 13-12 in the district championship game. “We know teams are going to play hard against us; we’ve just got to play better.”

Troy outscored their opponents 55-26 at the district tournament but aim to score more earned runs at state.

“We’ve got to help ourselves out a little,” Fox said. “We can’t sit back and wait on the other team to help us.”

Troy defeated Ashford in a slugfest 13-12, to win the berth to Enterprise.

Troy tied it at one in the second inning when Hunter Baggett scored on a wild pitch.

Ashford would score five in the third in part to three 2-out hits. In true Rocky fashion, Troy came back swinging.

Jason Fleming and Cole LaBrant would reach base on consecutive singles in the home half of the third. Rush Hixon and Ingram then both drew walks scoring Fleming.

Starting pitcher Xavius Burden drove in one with a fielder’s choice. Baggett drove a double into left field to score two more brining Troy within one. For the second time, Baggett tied the game, this time at 6, when Chase Hartley reached on an error.

Hartley, who relieved Burden in the third, allowed three runs in the fourth giving Ashford a 9-6 advantage.

Troy would get one run back on a Burden RBI double.

Reilly Fox, Devin Hooks, and Burden would all add RBI single in the sixth handing Troy their first lead of the game, 12-9.

After Ashford scored one in the seventh, head coach Gary Fox brought in Ingram with two outs. James Lindsey then launched a 2-1 pitch deep into the night to tie the game at 12.

Troy’s perseverance once again prevailed. With one out, Ingram worked the count full before being called out on strikes.

The catcher, however, dropped the ball and without hesitation Ingram raced for first beating the throw by a step. Ingram reached second on a Burden fielder’s choice.

Now with two outs, Fox lofted a deep fly ball into right field that dropped behind the Ashford defender, scoring Ingram and ending the game.

Troy will tangle with Enterprise on Saturday in the state tournament’s opening round. Game time is set for 7p.m.