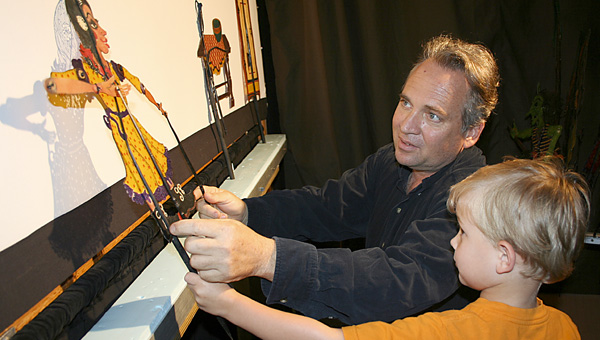 Well, not actually, television, not the way that it is known today but people were watching “silver screens” of sorts, called shadow puppet theaters where shadowy characters told stories on a cloth screen.

Back then before there was electricity, the ‘screens’ were lighted by an oil lamp.

On Tuesday, the children who are participating in the Summer Library Program at the Troy Public Library were entertained by a modern version of the ancient entertainment.

Richardson has worked for more than 25 years as a puppet player.

“I was hired in 1977 as a marionette performer touring Baltimore city recreation centers,” Richardson said. “In 1985, I was sent to Indonesia on the first of two Fulbright scholarships. Those experiences changed my life.”

It was in Indonesia that Richardson was introduced to shadow puppetry, especially the world famous Javanese wayang theater.

“Discovering the world of shadow puppet theater is one of the most important events of my life as an artist,” Richardson said. “There is a particular satisfaction for me creating new works in a tradition that maintains continuity with an ancient past.

“Even in an age of computer animation, there is a mysterious quality of being alive that happens when a leather puppet is worked against a cloth screen. With the past as my guide, it is a privilege to explore new ideas and stories with the luminous, entrancing world of the leather puppet.”

With thousands of marionette and shadow puppet performances to his credit, Richardson is considered a master at his craft, Colvin said.

“We are very fortunate to have Michael Richardson perform at our Summer Library Program,” she said. “This was a unique experience for our children. They were amazed and delighted by the shadow puppets and their stories. This is an experience that they will long remember. Not many children have that wonderful fun-learning experience.