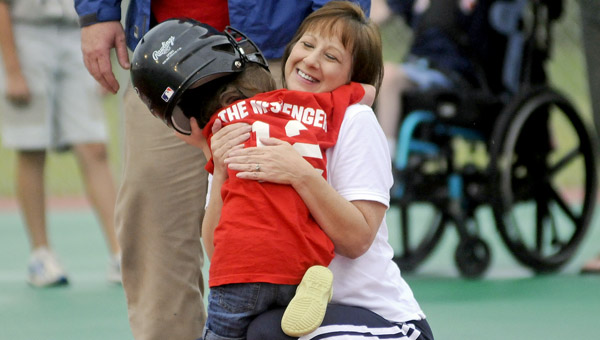 The Troy Miracle League opened its inaugural season beneath cloudy skies and a sprinkling of rain Thursday night. But nothing damped the spirits of those who came to applaud the efforts of so many in making the dream of playing baseball a reality for those with disabilities.

Tarbox said that Shoeless Joe Jackson walked out of an Iowa cornfield onto a baseball field carved out of the stalks and asked, “Is this heaven?”

“The answer was, ‘No, it’s Iowa,’” Tarbox said. “But tonight, we have a slice of heaven right here on this field.”

And, for the 24 players who took the Troy Miracle League Field a short time later, that diamond shaped patch of green was a bit of heaven.

“Austin has been talking about this night for two weeks,” said Austin’s dad Jason Turner. “He’s so excited to have a uniform and be a part of team and especially to play baseball. It’s true that all kids deserve a chance to play baseball and now our kids do. It means so much to Austin and to us. We’ll be forever grateful to all of those who made the dream of playing baseball come true for so many.”

The list of those whose donations made the Troy Miracle League Field a reality was long and included those who made monetary donations – dimes and dollars — and donations of materials, labor, time and talents.

Sheldan Sanders’ mom was choked with emotion as she expressed appreciation to the many who contributed to the dream.

“I thank you from the bottom of my heart for making it possible to have a place where people with disabilities can play without limitations and for creating a place that will hold a lifetime of memories,” she said.

Angel Carlson, president of the Troy Lions Club that believed in the dream from day one said the Troy Miracle League Field is a reality because of a community-wide effort to see it through.

“All of Pike County came together in support of the Troy Miracle League Field,” Carlson said. “I’m glad to call a place like Troy home.”

Among the dignitaries that attended the opening ceremonies was former State Senator Wendell Mitchell, who said that he was proud to have been a small part of something so special and so worthwhile.

“The most satisfying accomplishment is something that will make life better for those involved,” he said. “This Miracle League Field will provide opportunities and growth for these baseball players here tonight and those yet to take the field.”

Diane Alford, executive director of the National Miracle League Field organization, also alluded to “Field of Dreams” and a voice that said, “Build it and they will come.”

“And tonight, they have come,” she said in reference the gathering at the Troy Miracle League Field. “Another voice said, ‘ease the pain,” and now (those with disabilities) will no longer have to hear, ‘no you can’t play baseball,’ because, by golly, they can.

“Another voice said ‘go the distance’ and the people of this community have gone the distance to bring baseball to all children.