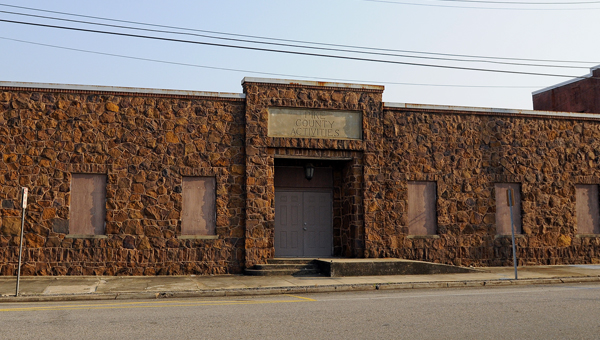 Renovations on the old rock building are “up in the air,” according to Pike County Commission Chairman Homer Wright, and it’s to the public to decide the building’s fate.

After having discussed the potential for renovating the existing building, which stands on the corner of Church and Market Streets, the county commissioners decided they would like to host a public hearing to seek input from the community.

Regardless of what the people decide, acquiring money to fund any potential project on the old rock building is a “big issue.”

“We can’t really say how much any renovations would cost right now until we find out how interested the public is about the building,” Wright said. “We’re trying to wait and see what the public says before we start publicizing how it’s going to be funded.”

County Administrator Harry Sanders said the public hearing, tentatively set for some time in August, would be instrumental in gauging the interest of the public about renovating the building and getting some ideas about funding.

“Money is not something we’re exactly wallowing in,” Sanders said. “We have our own difficulties meeting our current situation, so that will be the big challenge — finding the finances.”

Sanders said the only alternative is to let the building continue to do what it is doing now: decay.

“That’s not really an option that anybody wants to have happen,” Sanders said. “We’re just trying to see what the public thinks.”

Sanders said the public should know the Pike County Commission is “listening” and intends to move forward with practical renovations of the building.

“It all reverts back to the questions of where we will get the money to do the renovations, how extensive will they be and what will we do with the building once it’s renovated,” Sanders said.

Sanders said there have been several ideas about what could go in the building.

“We’ve had ideas, everything from housing to a combination of county and other governmental facilities, but it’s all wide open,” Sanders said.

Sanders said the big questions about money will be addressed during the public hearing.

“The least amount of money that we’ve been told it would take to renovate the building to where it can be useful was between $600 thousand and $700 thousand, which was about two or three years ago,” Sanders said.

And repair costs could top $2 million, a sum of money Commissioner Oren Fannin said is just too impractical.

“I’m all for saving and salvaging the old Rock Building,” Fannin said. “The bottom line is, we don’t have the money and there is nothing in the future that suggests we will come up with the money.”

Fannin said with the county in debt and no new method of raising revenue in sight, talk about renovations will continue to be just that – talk.

“The public hearing is all about trying to generate enough public interest to somehow raise funds to do something with the building,” Fannin said.

Fannin said the building has potential and said he sees an immediate need for courthouse expansion. “It could be used for any kind of overflow or growth of the courthouse, or we could rent office space to people, something which would be income producing,” Fannin said. “We could use the space for just about anything.”

Kathleen Sauer, president of the Pike County Chamber of Commerce, said she hopes something can be done to save the historical site and said she has fond memories of the building itself.

“It was always a heartfelt feeling when I talked to people in the community about the Rock Building,” Sauer said. “When it was built, it was a community endeavor. People from all over would collect their rocks and bring it to help in its construction.”