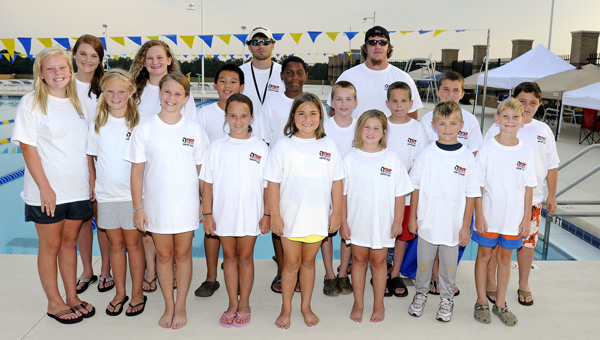 Members of the 2011 Tiger Sharks swim team pose for a photo at the Troy Parks and Recreation Center in Troy, Ala., Friday, June 10, 2011. (Messenger Staff Photo/Thomas Graning)

That is how Tiger Sharks swim team head coach Kirk Eigenberg described the 2011 squad on Friday.

“We are a litte bit smaller, but a lot of our kids are returning veterans,” he said. “That is very encouraging. We have brought in a few new swimmers. We would like to have a few more, but it is what it is.”

The Tiger Sharks start their season today in a meet at 10 a.m. at the Troy Parks and Recreation Center.

”Right now, we are ready to get into the swim meet season. We have been practicing but haven’t had any of the fun stuff at the meets. That is what the kids enjoy the most,” Eigenberg said.

The team is looking forward to the district comepetition at the end of the local meets.

“We cut down on the number of meets we are going to this year,” Eigenberg said. “We are looking forward to the district competition.

“The majority of our meets are little dual meets with teams within our district. They are fun as far as letting the kids get together to do relays. When it comes to district, that decides who goes to state.”

And Eigenberg is optimistic about those prospects. “With our veteran team, we have a lot of kids looking to make it to state this year. I think (the district meet) is where we are going to have our most fun.”