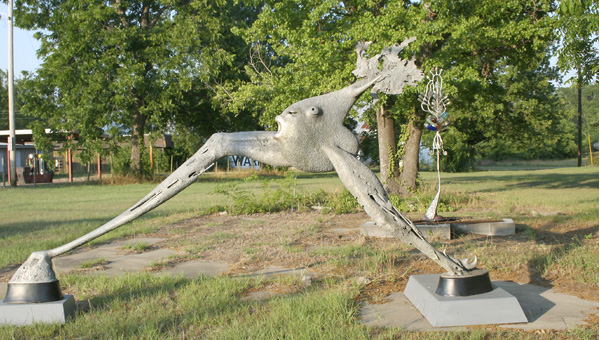 This scuplture, titled 'The Strider from Chernobyl', is one of several on display at Rondal Godwin's "park" in Brundidge.

The “Strider from Chernobyl” is back on the streets of Brundidge and its presence is causing a stir of interest.

It was in 1987, only a year after the meltdown at Chernobyl Nuclear Power Plant in the Ukraine in April 1986. Godwin said even back then he was concerned about the disastrous effect that such happenings would have on the planet and everything on it.

“When there’s an explosion at a nuclear plant like the ‘Chornobyl Catastrophe,’ large quantities of radioactive contamination is released into the atmosphere,” Godwin said. “Not only did the ‘nuclear accident’ cripple the Soviet economy, but 500,000 workers were affected and who knows how many of God’s other creatures.”

Godwin was so disturbed by the event that he expressed his frustration through his art.

He created “The Strider from Chernobyl,” a metal sculpture of a surreal fish that had been affected by the nuclear radiation.

“The ‘Strider’ is terrified of what has happened to him and he is running, running but there’s no place to go – no safe place to hide,” Godwin said.

Once Godwin completed the sculpture, he wanted to display it and asked permission to put it on the sidewalk on the corner of West 10th and Greenwich streets in New York City. Permission was denied.

“I did it anyway,” Godwin said. “‘The Strider’ created so much interest that the police had to come and direct traffic. It was all over television and in major newspapers. ‘The Strider’ received worldwide publicity and was featured in the Toronto Globe and Mail.”

New York city officials were so pleased with the publicity that they allowed Godwin to display “The Strider” for almost two weeks.

“They even congratulated me,” Godwin said, with a smile.

“The Strider” was exhibited many times in galleries around the country but not on the street again until many years later when the city of Brundidge allowed Godwin to display it on the lawn of the city hall.

Students at Troy University choreographed a dance called “The Strider” and groups of them had photographs taken with the runaway fish.

Until recently, “The Strider” stood alone on the Godwins’ private property on North Main Street in Brundidge.

Then, a tsunami hit Japan on March 11, 2011, and the Fukushima I Nuclear Power Plant in the Futaba District of Fukushima Prefecture suffered major damage that led to nuclear radiation leaks. Japanese authorities declared a 20km evacuation zone a no-go area, which could only be entered under government supervision.

Again, Godwin started thinking about and frightened by the ways high technology is affecting the world in both a positive and negative way. Again, he expressed his feelings through his art.

This time, through a creation he calls “The Scorpion of Fukushima.”

“‘The Scorpion’ expresses my strong reaction to the way civilization has affected life on this planet and the repercussions that it’s causing,” Godwin said. “The Earth is responding to things that happen to the environment. I express my feelings, my beliefs through these pieces.”

Godwin decided to be a little more “expressive” with his surreal pieces and moved “The Scorpion” street-side with “The Strider.”

Together, they have generated a lot of interest. Not just from local folks who stop to ask, “What is this?” but to travelers along the way.

Godwin decided that if a couple of his metal sculptures could attract the interest of passersby, maybe a few more sculptures would generate more interest.

With a giant runaway fish and a disjointed arthropod on the loose, Godwin thought it was time to corral them in a place of their own and call it the North Main Sculpture Park.

Godwin has added several more sculptures to the park including the “Magus,” which means magician.

“The ‘Magus’ is a humorous piece,” Godwin said. “A magician is always doing something to distract from his real intent. That’s why the sculpture has so many gyrations. It distracts you from what’s on its ‘mind.’ That makes it interesting.”

Godwin’s artistic interpretation of the bottle tree that originated in Africa is in the park.

“My bottle tree is different from the ones that are native to Africa, Haiti or even rural America but it can still trap haints,” he said, laughing.

Godwin’s figureheads scattered in the park are admittedly grotesque.

“I like stretching the human figure,” he said. “There’s just something more interesting to me in a twisted head that in a conventional one. I can do realism but I don’t like doing it. The grotesque. Now that’s interesting.

“I don’t know where these folks come from,” Godwin said. “Maybe they’re attracted by the Antique City signs. Maybe they are taking short cuts somewhere or maybe they’re lost, but I’ve had people from London and Canada, even Berlin stop at the sculpture park and a lot of local people. It’s amazing how curious people are. They stop and take photographs. It’s amazing. The more sculptures I add, the greater the attraction.”

Godwin said he likes having his work on the streets where ordinary citizens can look at it 24 hours a day.

“I guess I just have more luck showing my work on the streets than in a gallery,” he said, with a chuckle.

There’s no admission charge to Godwin’s North Main Sculpture Park. As far as Godwin knows, it’s the only one of its kind in a small rural town and he doesn’t mind one bit if it stays that way.