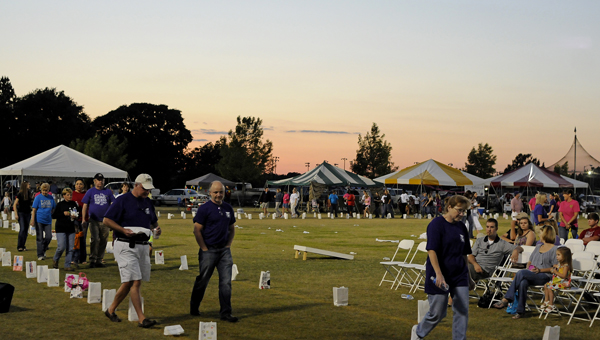 Participants walk the track during the 2011 Pike County Relay for Life in Troy, Ala., Friday, May 6, 2011. (Messenger Staff Photo/Thomas Graning)

A bright slice of moon seemingly hung within easy reach of those who participated in the merriment of the 2011 Pike County Relay for Life event at the Troy Recreation Park Friday night.

But, for many of those, life has been far from easy.

But they, like Lois Turner, know that as surely as there’s a moon it the sky, there’s a God in heaven. 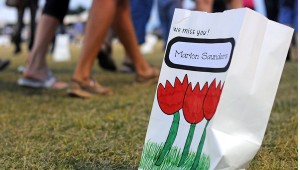 A luminary is seen as people walk the track during the 2011 Pike County Relay for Life in Troy, Ala., Friday, May 6, 2011. (Messenger Staff Photo/Thomas Graning)

Turner said that, when she was told that her cancer had come back and it was in her lungs, she thought that her life would soon be over. “My cancer was stage four and I didn’t think I would live long,” she said. “But God’s not ready for me. All of us who are survivors are here by the grace of God. What a wonderful night it is. How wonderful to be here. It’s overwhelming.” 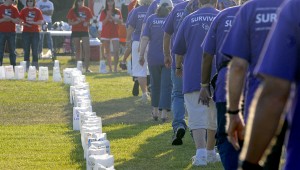 Survivors walk the first lap during the 2011 Pike County Relay for Life in Troy, Ala., Friday, May 6, 2011. (Messenger Staff Photo/Thomas Graning)

Those who made their way around the track early in the night celebrated the many victories that have been won over cancer.

The cancer survivors took the first lap and their caregivers joined them on the second lap. On the third lap, the teams that have worked so hard to raise funds for the 2011 Pike County Relay for Life campaign joined the others.

People of all ages and from all walks of life, joined the “relay.”

Among them were Lorraine Dunnum and her husband, Russ, who moved from Wisconsin to Pike County six years ago.

Lorraine is a cancer survivor and said that she feels blessed to be a part of such a wonderfully caring event.

“In Wisconsin there wasn’t an event like this in our area,” she said. “What is happening out here tonight is amazing. Hats off to all of those who have worked so hard to put all of this together and to the teams that have raised money for cancer research. I know that it makes a difference. It has in my life and in so many others.”

Jim Outlaw of the Tarentum community knows, too, what a difference Relay is making in the lives of so many.

His son, Holman, was diagnosed with retinoblastoma when he was only five months old.

“The treatments that Holman received were clinical trials,” Outlaw said. “Holman just turned 13 and I know that he has benefited from the research that has been done with funds raised at events like this.”

Outlaw said that before his son was diagnosed with cancer, he was afraid to even say the word. 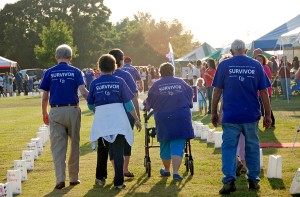 Survivors walk the first lap during the 2011 Pike County Relay for Life in Troy, Ala., Friday, May 6, 2011. (Messenger Staff Photo/Wendy Ward)

“It was just a word that I couldn’t say,” he said. “It was too scary. But now we can talk about it because we know there is hope for cancer patients and because of nights like this. But cancer is still a scary disease because you can have it and not know it. You can be walking around with it. A lot of money that is raised goes to fund research on early diagnosis and a lot of lives are being saved that way.”

Delaney Davenport, a Charles Henderson Middle School student, is a cancer survivor and, although having cancer is a devastating thing, she said that Relay for Life makes it all worthwhile because it gives hope.