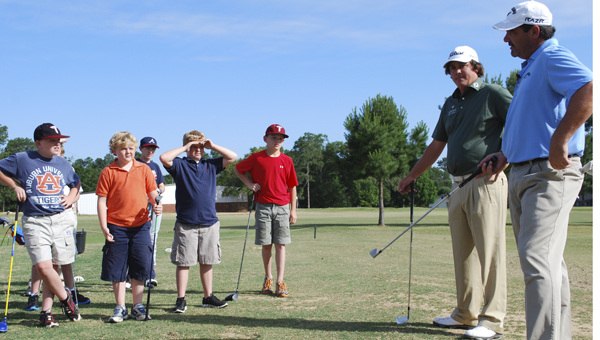 Above, Jason Dufner and Ben Bates talk to some young Troy golfers before the start of Thursday's golf clinic at the Troy Country Club.

On Thursday afternoon, the Troy Country Club driving range was filled up with more than just professional golfers warming up their swings.

As the Emerald Coast Gulf Tour/ Drex Guthrie Classic continued through its second day in Troy, several of the golfers took time away from the course to help youngsters learn the game they love.

And while techniques and the basics of the game were being explained, the real reason everyone was on hand was for a simple – to have fun.

“The main thing about (Thursday) is to have fun,” Bates said.

“Obviously, if we can help give them skills that they didn’t have before, and if they can learn something, that’s wonderful. But we mostly want to show them what golf has done for all of us and our lives and to just have fun with it.”

For Bates, to be able to give something back to the community where he spent five years of his life is ‘just wonderful’.

“Anytime you get to see kids out playing golf is a great thing,” he said.

“I just love the game and I think it’s great for kids to get involved with it, not just for the golf end of it, but socially it’s a wonderful game – it’s as good as it gets.”

As for Dufner, the pro golfer is recently coming off a third place finish in the PGA Tournament in New Orleans, and has already won over $1,200,000 this year on the pro circuit.

“We are hoping to just get the kids exposed to golf and give them some direction and instruction,” he said. “Sports are a big part of kids lives and the more we can get into golf, the better.”

For Dufner, while he has been playing golf competitively since he was just 15-years-old, the sport has always been special to him.

“It’s definitely good to see kids this young playing the sport,” he said.

“Golf is a great way to form relationships. It’s an activity that a lot of people enjoy.”

The Troy clinic is not the first Dufner has been a part of. Last year, he helped many kids learn the game, including in China.

“The clinics are a really good thing to be a part of,” Dufner said.

“It’s always good to give back to the community and to help teach kids about a great game like golf.”

A Troy Trojans player fields the ball during a baseball game in Troy, Ala., Sunday, May 1, 2011. (Messenger Staff... read more