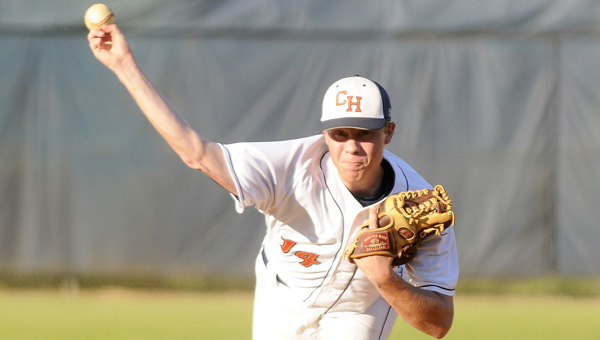 As Charles Henderson prepares for its first round playoff matchup with Russell County, it will do so as a full team for the first time in several weeks.

It has been two weeks since Harrison Reeves was hit in the face while fielding a ground ball at first base.

A trip to the hospital and one surgery later, the senior has been back with this teammates practicing all week long – with the hopes of taking the field, and more importantly the mound, on today.

Reeves has taken several steps towards that goal, with bullpen sessions on Wednesday and Thursday as well as participating in several other fielding drills.

“Right now, I’m just trying to see just how my stamina is,” the senior said. “It’s still difficult to breath through my nose.

“I got to see just how much I can give the team off the mound. That’s really the only place I can really contribute with the situation. I got to see where I can be most effective to best help the team.”

Before the injury, Reeves was the team’s No. 1 starter, and pitched like it.

In 48 and two-thirds innings so far this season, the senior has a 4-2 record, 2-0 in region play, with a3.45 ERA and 33 strikeouts. To not only know that one of his best pitchers is OK but also that he is going to be back with the team for the most important part of the season is something Trojans’ head coach Derek Irons said he was thankful for.

“He is going to be good to go in some capacity,” the coach said.

“I’m not sure whether he is going to be a starter, reliever or what. But having him back here is huge. He is one of best leaders. He has been on the varsity for three years now and has thrown some big innings – especially in the playoffs last year.”

As for Reeves, just to be back with his teammates on the field has been ‘great’.

“I was scared when I first got hit, everything kind of went numb,” he said.

Going into the series, Reeves and fellow senior Blake Hutchinson are the only pitchers who have playoff experience thanks to last season.

It’s that playing time that Reeves said he was going to use to not only prepare himself for what’s to come, but also to help prepare his younger teammates.

“(For the playoffs) We have to play defense, and that is a place where we have struggled a lot this year,” he said.

“We have fallen behind in the count a lot as well. The main thing is, we have to focus on the little things if we want to be successful. If we do that, we are going to be fine.”

Even though Russell County may have the better record, and home field advantage, that does not necessarily mean that the Warriors will have the advantage, according to Reeves.