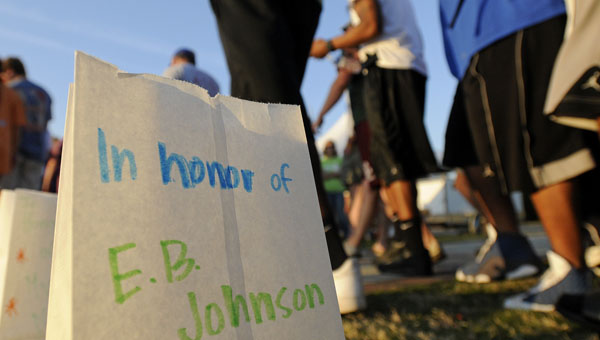 A luminary honoring E.B. Johnson is seen as people walk a lap during the 2011 Troy University Relay for Life in Troy, Ala., Friday, March 25, 2011. (Messenger Staff Photo/Thomas Graning)

The Relay event was held at the Green Davis Tailgate Terrace from 3 p.m. Friday until 3 a.m. Saturday.

“Although the Troy University Relay for Life campaign is separate from the countywide campaign, the funds raised support the Pike County Relay campaign,” she said. “The university Relay campaign is organized, planned and carried out by students. Many of the students involved were involved in community Relay events prior to coming to the university. Our hope is that their involvement here will carry over to the communities they call home after graduation.”

The Troy University Relay for Life event is patterned after the Relay events that are held all across the United States.

“The Survivors Walk began at 6 p.m. and all of the events are basically the same as any culminating Relay event,” Franklin said.

“The students do have an extra event, the Heroes Lap, where they carry photographs of those who are reason they Relay.”

Some carried banners with names of their “Heroes.”

The Relay organizers had games planned and there was food. Bands provided entertainment throughout the night as the students and others celebrated the victories that have been won over cancer.