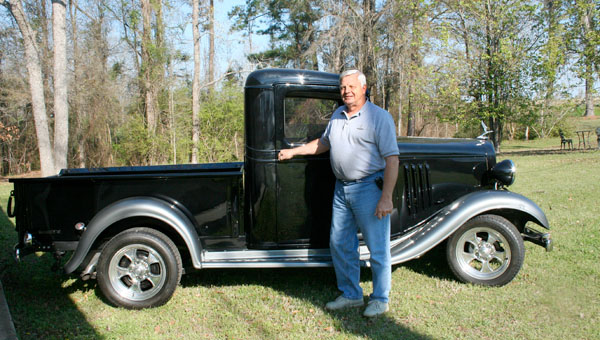 Richards of the Tarentum community would probably balk if someone referred to him as a mechanical genius.

Some folks do but he doesn’t know that.

Anyone who can restore an old Singer pedal sewing machine and then make his wife a long sleeve dress on it and can cut a rusted-out 1934 Chevy truck out of the bushes and restore it to its original condition is deserving of the title “mechanical genius.”

Richards isn’t exactly sure where he got his mechanical mind, he just knows that he came straight out of the cradle with an unbridled curiosity.

Richards became the man of the house at an early age. His dad had joined the army as a way to make a better living for his family and was killed during the early stages of the Korean Conflict.

Richards’ dad grew up in a poor family in Minnesota. He was the oldest of 15 children and having to walk three miles to school was a walk in the park for him.

“From what I was told, my dad and his brothers had to walk five miles to school and trap along the way so they would have something to eat,” Richards said. “My grandfather had a homestead farm and he raised a brood to work the farm. So, the army was a better way for my dad.”

Richards was only 5 years old when his dad was killed. The family had moved to Columbus, Ga., to be near the Army base so he, his mother and sister sort of homesteaded there.

Money was rather scarce so Richards’ toys were things that needed to be fixed – or not. As he got older and his mother was better able to care for the material needs and wants of the family, his wants included “toys” such as electronic kits and erector sets.

“When I was about 17, I got a job at a filling station and did some trouble-shooting there,” Richards said, with a smile. “I went to a college in Columbus in order to prepare for Auburn.”

Richards earned a degree in civil engineering at Auburn and came very close to a dual degree that would have included mechanical engineering.

Life was good for him.

He had married a striking, young woman whom he had flagged down while working with the Georgia Highway Department. He was primed for a challenging and rewarding career as an engineer in many phases of construction.

Richards’ work left him little time to tinker. He found time for small projects that didn’t pay anything but brought him great satisfaction in having accepted a challenge and triumphed over it.

Richards earned the reputation as an engineer who could build a piece of machinery for any custom design.

He, his wife, Sue, and son, Michael, made their home in Dalton, Ga., but his work too often took him far from home. Finally, he said enough is enough and accepted a job as a corporate engineer closer to home.

Michael Richards was a chip off the old block and showed an interest in mechanical things. So, when his dad did some rather sharp horse trading for a rusted out 1934 Chevy truck and literally cut it out of the bushes, he took great interest in the project.

The truck was hauled to the house and his mom was surprised to look out the window one day and see her son sitting on a five-gallon bucket and driving the piece of “junk’ that had just cranked right up when coaxed.

That was in 1988 and the same year that Mike Richards got back to taking things apart and putting them back together just out of curiosity.

“The Chevy truck had a wood interior frame and all of those pieces had to be handcrafted,” Richards said. “There were nine pieces of wood just in the door. I used oak and some of the wood would be warped and I’d have to redo it.”

Many of the metal parts had to be refabricated and Richards had to completely fabricate the back section of the cab that had completely rusted away.

“I went to Hershey, Pennsylvania, and purchased original hardware and parts for the truck,” he said. “I put in hydraulic brakes because it would be too dangerous to get on the highway with mechanical brakes. They just won’t stop it time.”

The 1934 Chevy truck was “designed” to be more than a showpiece. Richards wanted to put it on the road and enjoy it. So, he first wanted to restore the body but he didn’t want to be limited in the driving of it. So he gave it a few more “horses” than it had in 1934.

The sleek, shiny ’34 Chevy truck turns heads wherever it goes and Richards is pleased with what he has been able to do. However, there will come a day when he takes the original chassis down from its lofty perch in the shop, restores it and then tops it with the restored body. He will replace any “easy riding” parts of the Chevy that aren’t original with ones that are. The Chevy truck’s time on the road will be limited as it takes its rightful place among vehicles that are original from bumper to bumper.

That day may come sooner than later so Richards has another project on the front burner – a 1949 Willys Jeep that just might be one of 50 or less still around.

“This jeep is very unusual in that it’s a Farm Jeep,” Richards said.

“This is a special breed in that it’s an agricultural jeep. Around the end of World War II, farmers didn’t have the money to by a car and a tractor, so Willys turned its military jeep into a civilian jeep.”

“It’s a heavy gauge jeep with a ‘Go devil engine’ and hookups for farm implements, plows and such,” Richard said. “The Farm Jeep came out around 1945 and by 1949 times had changed and it never was put into wide use. Not many of the Ag series Farm Jeeps were produced so they are rather rare. This one is going to be fun to restore and I’m looking forward to getting to work on it.”

Richards’ interests and talents aren’t limited to the restoration of vehicles and the pumping of the pedal of a Singer, he also is a craftsman who can turn a piece of wood into a work of art or restore an ailing piece of furniture to full strength.

– And, as long as his curiosity continues to get the best of him, Richards will keep turning sow’s ears into silk purses or something even better.