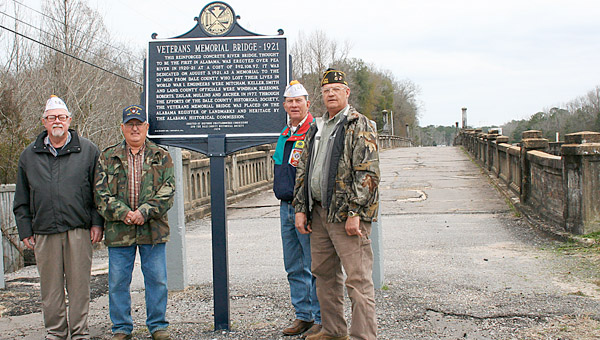 The historical marker at Veterans Bridge on Highway 231 south of Brundidge was rededicated Wednesday afternoon in a ceremony conducted by Brundidge VFW Post 7055.

The marker had given way to time and the elements making the inscriptions difficult to read, said Freddie Turner, Post 7055 quartermaster.

“The Dale County Historical Society and the Historical Commission adopted the Pea River Veterans Bridge as a historical site and erected the marker 1979,” Turner said. “Brundidge VFW Post 7055 adopted the area about 10 years ago and we’ve tried to keep the area clean and presentable. But the marker had faded and the paint flaked off and it had to be refinished.”

VFW Post 7055 raised the funds necessary to have the marker refinished and didn’t want the refinished marker to be put back in place without some pomp and circumstance.

“This bridge is a fitting structure as a reminder of how our forefathers struggled to adapt and improve this country for future generations,” Turner said.

Veterans Bridge was built in 1921 and is thought to be the first reinforced concrete bridge in Alabama. It was dedicated to the Dale County soldiers who died in World War I.

“The area around the bridge is also thought to be the first paved road built in the state,” Turner said. “The bridge is located where what local people call Beck’s Mill. But, the area supported a mill as far back as 1832.”

Edmond Black, a homesteader, settled there around 1831 and built a mill the following year. “In 1844, a post office was located there along with a sawmill,” Turner said. The post office was called River Mills Post Office. In later years, there was a tourist camp, a dance pavilion, a public swimming pool and an entertainment stage. Hank Williams Sr. often performed there.”

The Veterans Bridge was built using World War I ERA trucks. “There were twin derricks, one on each side of the river,” Turner said. “Cables were strung across the river with buckets of cement and a pulley. Workers would fill the buckets on one side of the river and a truck would drive up the river and pull the buckets out to be dumped. They would do that over and over again.” Turner said he was thankful that there were people who had the will and knowledge to build the Pea River Veterans Bridge.

“And I thank God for the brave men and women that this bridge was dedicated to and for all our veterans,” Turner said. “I think locations like this should be preserved for future generations.”