Cooking up a good time 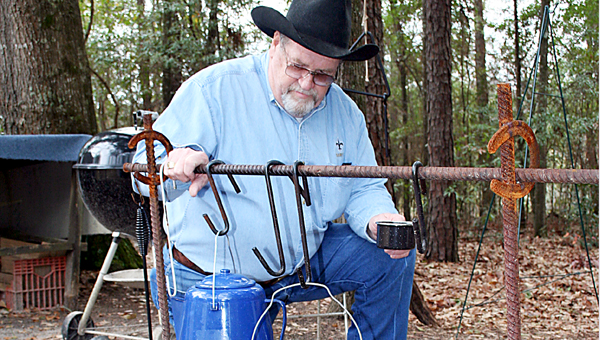 B.B. Palmer developed an affiinity for Ducth-oven cooking during his time in Colorado, and now he's looking for others in Pike County who might share an interest in it.

When B.B Palmer and his wife, Nita, left the Palmerosa in rural Pike County in March to “settle” in Colorado, he did so without looking back.

“I just missed home,” Palmer said with a smile. “It’s good to be back and I think that I’m here to stay.”

The Palmers moved to Colorado to be near their daughter and her husband, Krystal and Mark Shaker, and their first grandbaby, Maisy. “The plans now are for Nita to fly out to Colorado once a month and I’ll go out pretty often, but this is home,” Palmer said, as he sat on the back deck that overlooks a huge wooded area.

But Palmer didn’t leave the Old West without having been imprinted by it.

“I’ve got a friend out there, Kit Haddock, that has a chuck wagon business,” Palmer said. “He stays busy and sometimes, he’s got more than he can handle with the help that he has. One day, Kit called and asked me if I could help cook the next day for a trail ride and I jumped at the chance.”

As a member of the Pike County Cattlemen’s Association and a rather good grill master, Palmer was in his element flinging ribeyes on the grill.

“We cooked for 180 people on the Pike’s Peak Range Riders Trail Ride,” he said. “It was their 62nd trail ride and they came in a hungry bunch.”

Palmer joined four other cooks in preparing food for the hungry horsemen.

“I toted wood, peeled hundreds of potatoes, stirred beans – just whatever there was to do,” he said. “We cooked posole, which is a Mexican dish made with hominy, chili peppers, garlic and other good stuff. We had pinto beans, herb potatoes, biscuits and apple cobbler. We cooked the beans in a pot, and the potatoes, biscuits and cobbler in Dutch ovens. The steaks, we cooked on the grill.

“It was a lot of fun. I’d never cooked in a Dutch oven before. It was amazing to learn how to regulate charcoal heat – one coal for every 15 degrees. And you put more coals on the top that on the bottom. Everything came out just right.”

Palmer found so much enjoyment in Dutch oven cooking that he decided that he wanted to do outdoor cooking on his own.

Palmer said he would like for anyone who enjoys Dutch oven cooking or thinks they might to get in touch with him.

Anyone who is interested in Dutch oven cooking is encouraged to contact B.B. Palmer at 334-672-2728 or at bbnita47@yahoo.com