Year in Review: The Arts 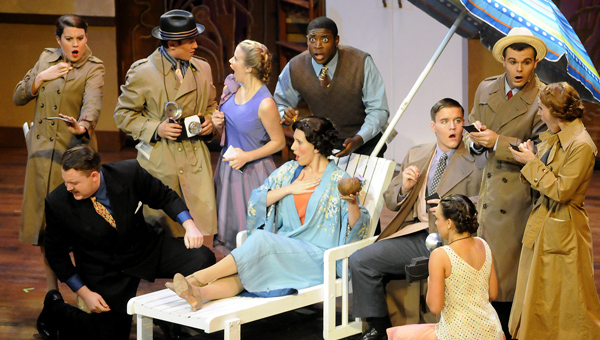 Members of the cast perform a scene during the final rehearsal of "The Drowsy Chaperone" at the Troy University Trojan Center Theater. (Messenger Staff Photo/Thomas Graning)

Pike County has become a mecca for the arts in Southeast Alabama.

The Troy Arts Council, the granddaddy of local arts organizations at almost 40 years, had a banner year in 2010 even though funding was a major concern going into the year.

“At the beginning of the year, as chair of the patrons’ drive, I was a little worried because proration cut into our funding from the local and state levels,” said Elaine Blair. “It seems that proration is a never-ending cycle. But our patrons’ drive is most important in providing us with the funds that we need to offer a calendar year of outstanding programming. Again our patrons came through.”

In September, the TAC presented Billy Jonas, who makes music with almost anything that can be retrieved from a dump pile.

“Billy Jonas kicked off our season and he was a fabulous success,” Blair said. “He was a huge success with the schools, too, and we need to look to doing more for the schools because the school art programs are being hit with cuts as well.”

“Yesterday and Today” was the TAC offering in October. Blair said the Beatle-type singers were a lot of fun.

“They didn’t look like the Beatles and didn’t sound like them but they were the Beatles re-incarnated. It was an audience participation program and some members of the audience seemed to have gone back to the early years of the Beatles to try and stump them. But, they knew every request that was thrown at them.”

The Lily Kai Chinese Dance troupe took the stage in November and their performance was “simply beautiful.”

“And Shelia Jackson and Company was an amazing performance,” Blair said. “We all know what an incredible voice Shelia has but she is not just a singer. Shelia is a performer. She doesn’t just get up and sing. She performs. The entire show was outstanding – the dancers, backup singers and the musicians.”

The 2011 TAC Season will open in January with “Life is So Good,” a stage play based on the book by George Dawson and Richard Glaubman.

“It’s the story of a man’s extraordinary journey through the 20th century and how he learned to read at age 98,” Blair said.

In February, the Kremlin Orchestra will be in town on Valentine’s Day and Blair said the orchestra has been asked to play a tipped bill of romantic music.

“This will be a performance to take your honey to,” Blair said. “In March, Barrage, a youthful dance show, will come to town and, in April, the Amadeus Trio will entertain and another big event will be the annual TroyFest.

“In May, we have two big events,” Blair said. “The Southeastern Alabama Community Band led by Dr. Johnny Long will take center stage. The band’s performance is always one of our most popular events. Also in May will be the Chris Beck art exhibit. Chris won the 2010 TroyFest Best of Show award with his metal sculpture. He is entitled to his own show and it will be huge draw because of the art and also because Chris is from Troy.”

The Brundidge Historical Society is both a historical and arts organization. The BHS focuses its efforts on the folk life and art presentations that include an original folk life play, a harvest and heritage celebration, a storytelling festival and other storytelling events.

Lawrence Bowden, BHS president, said the year 2010 was an outstanding year for the traditional programming that the organization presents.

“The 2010 Pike Piddlers Storytelling Festival at the We Piddle Around Theater and the Trojan Center Theater was a great success even though one of our tellers was iced-in in Tulsa,” Bowden said. “Barbara McBride-Smith was unable to get here because of the weather but Donald Davis, Elizabeth Ellis and Kevin Kling filled her slot admirable. They were all outstanding as were the musicians who did the pre-shows. Both theaters were filled for all four concerts. The only way that it could have been better was if Barbara had been here.”

The spring production of Alabama’s Official Folk Life Play, “Come Home, It’s Suppertime” was sold out at the We Piddle Around Theater

“In October, the 19th Annual Peanut Butter Festival was Brundidge’s ‘Small Town Downtown’ event and we had one of the largest crowds ever for our harvest and heritage celebration,” Bowden said. “In November, we had our fall production of ‘Come Home’ and were fortunate again to sell it out. In both the spring and fall productions, we had several new cast members and new musicians and they all did an outstanding job, as did everyone.”

In December Andy Offutt Irwin returned to the We Piddle Around Theater for the annual Chili Country Christmas shows and, as always, Irwin is a crowd pleaser.

“We had a successful 2010 season and, although money is tight, were have tried to be conservative in the past and, hopefully, we will be able to continue with our programs as we have in the past.”

Bowden said the BHS will announce its 2011 Pike Piddlers Storytelling Festival lineup in the next few days.

“We’ll continue with our spring and fall productions of ‘Come Home,’ the June and December storytelling events and the Peanut Butter Festival,” he said. “And, if we think of something else to do, we’ll try to do that, too.”

The Troy-Pike Cultural Arts Center/ Johnson Center for the Arts is the newest arts organization but it hit the ground running and hasn’t slowed down a step in more than two years.

Led by Richard Metzger, executive director, the “Center” has quickly gained a name for itself all across the state and beyond for the outstanding year around arts exhibitions.

“The exhibition was outstanding and having the artists available to talk about their works was an incredible opportunity,” White said.

In April, the winner of the TroyFest Best of Show, Anouk Gunter of Enterprise, was the featured artist. In the back gallery, the children’s art from the Troy City School was on exhibit.

“In May, June and July, the Johnson Center was the host gallery for the 69th Annual Juried Watercolor Society of Alabama Exhibition,” White said. “This was a really big deal for us because it featured the works of more than 100 watercolor artists from across the state. The works were submitted and juried by Marilyn Phillis of West Virginia for the show. In the downstairs gallery, Sandra Hicks’ Montgomery landscapes were exhibited and it was a great show.”

The “Looking Through the Lens: 100 Years of Photography” featuring the photography of Holman Johnson of Troy and D.L. Hightower of Clayton celebrated the 100 years of the former Troy Post Office which is now the home of the Johnson Center for the Arts.

The Christmas tree extravaganza is an annual show at the Johnson Center and was especially popular this year because the several of the trees were decorated by school children and for children.

White said the year 2011 is going to be a banner year for the Johnson Center and will get off to a tremendous start with the Artists of Montgomery exhibition January through March.

“This show will feature the works of 100 prominent Montgomery artists,” she said. “Chris Beck, the winner of the TroyFest Best of Show Award will be the featured artist in the spring,” White said. “In June and July, the sculptures of two outstanding local artists, Duane Paxson of Troy and Larry Godwin of Brundidge, will be featured in the ‘2 Men in 3D,’ exhibit.”

Then, in August will come the “biggie” – the “Celebration of Contemporary Art in Alabama: The Biennial.”

“This exhibition will feature the artwork of 90 Alabama State Council on the Arts Fellowship Award winners,” White said. “The fellowship awards are very prestigious and highly coveted awards.”

Two falls ago, the Johnson Center brought together, for the first time, a large number of state arts council Fellowship awards winners and the show was extremely successful.

“This time it will be an even bigger deal because of the large number of artists participating and the exceptional quality of their work,” White said. “The Johnson Center has become the showplace for Alabama artists to present their work and we are very excited about that and the future possibilities that it holds.”