Andress honored as a ‘patriot’ 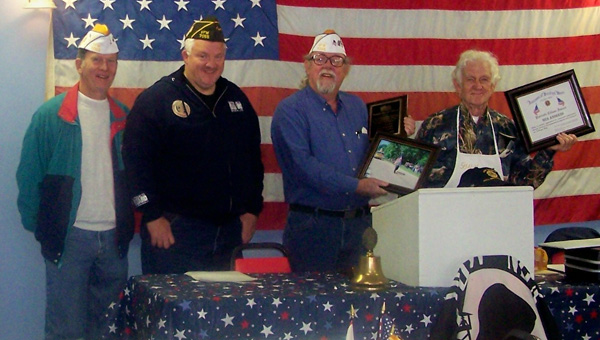 American patriot Ben Andress of Banks was honored by Brundidge VFW Post 7055 on Saturday for his long and dedicated service to his country and his community.

VFW Post 7055 presented Andress with a Patriotic Citizen Certificate, a plaque and a cap from the 50th Anniversary of the 900th Maintenance Company based in Brundidge.

“Ben was a member of the 900th for many years and a cook for several years,” said Freddie Turner, quartermaster Post 7055. “He was famous for his sourdough biscuits and S.O.S.”

“That’s all I’ll say about that,” Turner said, laughing. “But it’s still good.”

The recognition awards were presented to Andress Saturday morning at American Legion Post 70 where Andress cooks breakfast the second Saturday of each month.

After breakfast, if there is food left over, Andress will gather it up and take it around town and share it with workers on and around the square.

“If there is anybody who is more patriotic or more community minded than Ben Andress, I don’t know who it is,” Turner said. “Ben has been a fixture in parades all around the county for at least 30 years. He carries the American flag for Charlie’s Angels and sometimes he carries it alone. If there is a parade around and Ben can get there, he’ll carry the flag. That’s important to him and we appreciate his dedication.”

Turner said Andress is a humble man who shies away from any kind of recognition.

“Ben doesn’t do anything that he does for recognition and he doesn’t really want any,” Turner said. “He does what he does for his country and his community because his heart’s in it. He doesn’t want credit for anything or accolades. He’s satisfied with just being Ben.

“But he deserves recognition. If anybody does, Ben does. We just wanted to show him how much we appreciate him and wanted to thank him for all that he does. Ben is a great patriot and a kind and caring man. We salute him.”