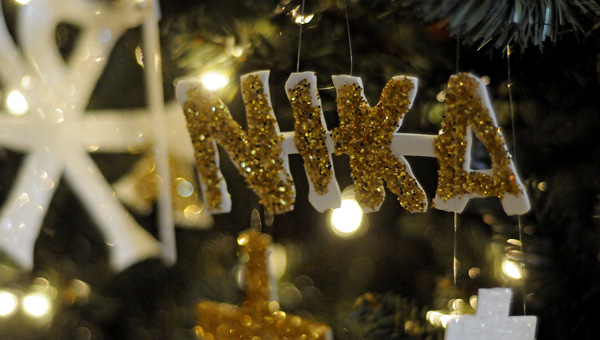 An ornament is seen on the Chrismon Tree at the Johnson Center for the Arts. (Messenger Staff Photo/Thomas Graning)

All of the Who’s down in Whoville proved that Christmas can come without tinsel and bows, but Christmas without a Christmas tree just wouldn’t be Christmas.

The Johnson Center for the Arts’ “Christmas in the Center” features nine Christmas trees decorated in a variety of themes. There’s a folk life tree, an angel tree and a patriotic tree. Another tree is a nature tree and there’s a love and peace tree and an old fashioned tree with paper chains and gingerbread men. One tree has nothing but glass balls and then there’s the Chrismon tree.

“The Chrismon tree is my favorite because it has so much sentiment and meaning to me,” Claire Murphy said. “I grew up in the Methodist church. My dad was a minister and we always had a Chrismon tree in the church and I learned early on the meaning of many of the symbols of Christmas.”

Murphy said Chrismon is actually a monogram for CHRISt and MONongram.

“All Chrismons are made in combinations of white and gold,” Murphy said. “White, the liturgical color for Christmas, refers to our Lord’s purity and perfection. Gold represents His majesty and glory. We point to the Christ as the Light of the World by using tiny lights on the tree. The green tree is representative of everlasting life and that is what God promises us.”

Murphy said the Holy Trinity is represented in many different ways on the Chrismon tree.

“The equilateral triangle symbolizes the Trinity, the Father, Son and Holy Spirit,” she said. “The three distinct angles combine to make one complete figure. The trefoil and the shamrock are also representative of the Holy Trinity, as is the iris, which has three upright petals and three petals that drape downward. Each set represents the Trinity.”

Murphy said three entwined circles are also a symbol of the Trinity. The overlapping circles represent the nature of God and the circle itself stands for the eternal nature of God. “The circle has no beginning and no end, just like God.”

Crosses always have a place on a Chrismon tree. The crosses come in many shapes but all are symbolic of a risen Lord. Stars are another Christmas symbol and, when formed at right angles, the stars suggest the close relationship between the birth and death of Christ.

“The five-point star, is commonly called the Star of Epiphany,” Murphy said. “Epiphany is the time the Christ Child was shown to the Wise Men. According to tradition, this occurred 12 days after the birth.

“The six-point star, the Star of David, refers to the attributers of God – power, wisdom, majesty, love, mercy and justice. The nine-pointed star stands for the Fruits of the Spirit – love, peace, patience, kindness, goodness, faithfulness, gentleness and self-control.”

Monograms and letters on the tree are reminders of Christ. Alpha and Omega are used by Christians as a sign of God’s all powerfulness and that He is the beginning and the end.

Chi Rho is the oldest monogram for Jesus Christ and the letters I N R I are the first letters of the words in the Latin superscription, “Jesus of Nazareth, King of the Jews.”

“Flowers also have a place on the Chrismon tree,” Murphy said.

Many Christian symbols have been added to the age old Chrismons and can be seen on traditional Christmas trees as well.

“Angels are included because they are the messengers of God,” Murphy said. “Herald angels symbolize the nativity of our Lord. The Bible is often found on Chrismon trees because it is the word of God.

“A lamp is a symbol of knowledge and learning and reminds us how the Word of God sheds light on our lives.”

In today’s world, the butterfly symbolizes eternal life and the resurrection in Christ.

“Cups and wafers are sometimes placed on the Chrismon tree to represent the body of Christ and the sacrament of Holy Communion,” Murphy said.

Other modern symbols of Christmas that are placed on the Chrismon tree are the bell, which calls people to worship.

“The bell symbolizes the need for priority for the things of God over secular wants,” Murphy said.

“It is the sounding forth of the Word. A bunch of grapes symbolizes the communion wine.”

One of the most recent symbols to be found on the Chrismon tree is the heart.

“The heart has long been thought of as the center of every impulse to help others. It is a symbol of Christian love and resulting service.”

Murphy said the heart is also a reminder of the admonition of Proverbs 4:23, “Keep your heart with all vigilance for from it flows the springs of life.”

The Chrismon tree is beautiful but it also has much meaning for Christians.

“But the Chrismon tree is complete only when those who see it understand its meaning,” Murphy said. “Everyone is invited to visit the Johnson Center for the Arts this Christmas season and find their own personal meaning in the symbols of the Chrismon tree.”