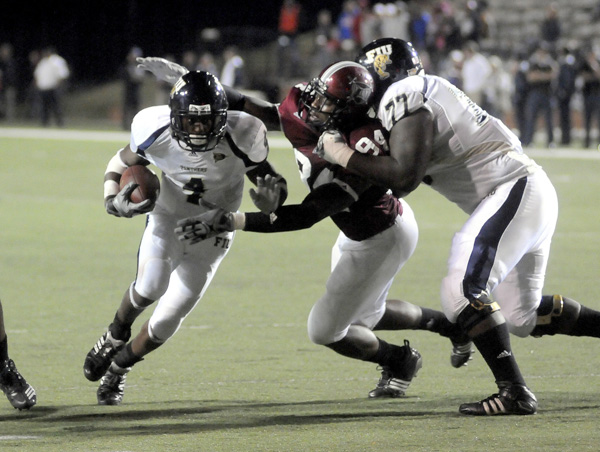 While the Troy Trojans may be well known for the offensive players it has had the past couple of seasons, there have been several players on the opposite side of the ball that have made the team in cardinal and white proud.

Following the footsteps of current NFL defensive linemen DeMarcus Ware and Osi Umenyiora, red shirt sophomore Jonathan Massaqoui is making a name for himself in the 2010.

While the Trojan may not have been a household name coming into the season, that is not the case now, as he proved to be a force for the Trojan defense.

Coming into the game against Florida International, the 6-foot-2, 251-pound Massaqoui was the leading tackler in the Sun Belt Conference, with 53 total tackles, 38 of which were unassisted.

He also was led the conference with tackles for a loss, with 13.5.

He was also selected the conference’s Defensive Player of the Week back in week three.

But the conference is not the only place where Massaqoui’s name is at the top of the list.

Entering week nine, the native of Lawrenceville, Ga., was No. 2 in the nation in sacks per game as he had posted three sacks in each of the last two games against Louisiana-Monroe and North Texas.

However, against Florida International, both Massaqoui and the Trojans were silenced in a 52-35 defeat.

“This was a tough game for us,” the defender said. “It’s an embarrassment to come out like that in front of our home crowd, on our home field.

“(FIU) was a team that was hungry for a win and they got it. They are a good running team, maybe not the best we have seen all season long, but definitely one of the better ones. My hats down to them, they played really well and as a defense, as a team, we couldn’t get the job done. It all just came down to who wanted it the most.”

Against the Golden Panthers, Massaqoui had his least productive game since becoming a starter, finishing with just three tackles, one of which was for a loss.

That does not mean his presence was not felt however, as he forced two holding calls against the FIU offensive line.

But now, with the most recent loss, the Trojans find themselves with their backs to the wall in the conference for the firs time in nearly five seasons.

“We have to regroup, we have to keep fighting,” Massqoui said.

“I believe that this team is capable of doing a lot of good things, but we have to work together, especially right now. We can’t get down on ours.

“We played poorly on defense (against FIU) but we have to put that lose behind us and work towards getting better.”