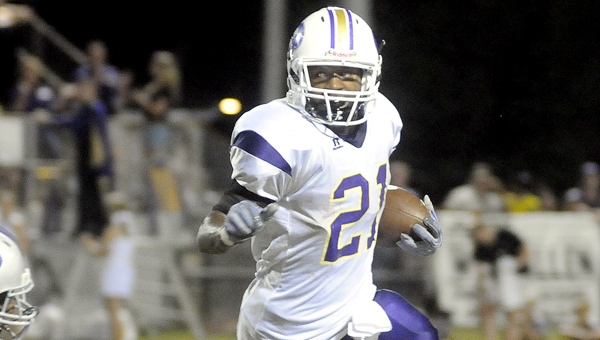 While the playoffs are almost assured for the Goshen Eagles for a second-consecutive season, there is another goal the team is looking to accomplish for the second time in two seasons.

And with a win tonight against Highland Home, the Eagles will be able to say, ‘mission accomplished.’

For the first time in years, the Eagles played host to a playoff game in the 2009 season and all that stands in their way of repeating that feat is the Flying Squadron.

Despite the high school being on fall break, Eagles’ head coach Bart Snyder said his players have had a very good week of practice, as both the players and the coaches look to lock up home field advantage.

“Practice has been very up beat for us this week, especially Tuesday. The guys are working extremely hard to get prepared for Friday night, and hopefully, it all comes through for us.”

If there is one thing fans can expect in the matchup it’s a high scoring game.

In the previous four meetings between the two teams, a total of 269 points have been scored.

In those four games, both the Eagles and the Flying Squadron have won two games.

“They are very aggressive and very capable of moving the ball on the field. Plus they have some momentum coming into the game thanks to its win over Red Level last week, so we are going to have to be ready to play.”

HHHS will enter the game winning three of its last four games, with the lone loss coming against undefeated Elba back in week six.

For the season, the Flying Squadron currently has a 4-3 overall record and a 2-3 2A Region 2 record.

As for how the region standings look, the Eagles are currently in second place at 3-1, with a win locking that position for the remainder of the season.

“I like where we are right now,” Snyder said. “Each week is a stepping process.

“While we probably won’t get to our main goal of winning the region, we are still close to getting two of our goals in getting to the playoffs and hosting a playoff game. We can’t get ahead of ourselves though, and the guys know and understand that.

“We have been and will continue to take it one game at a time,” the coach added.

As always, leading the charge for the Eagles are running backs Reginald Foster and Marcus Jackson.

Coming into tonight’s game, the Eagle duo has combined for 1,354 rushing yards and 150 points on the board.

The junior Foster has 810 yards on the season, while his senior counterpart has 544.

That running attack has helped lead GHS on a four-game winning streak, and also made the Eagles one of the highest scoring team in the region, but Snyder said there is still room for improvement.

“We are still getting better each week,” the coach said, “and that is encouraging to see.

“I think out of a scale of 100, we are playing at 65 or 70 percent capacity. I would love to see us play games like we did against Pike County, but there is still a lot of time left before the playoffs so we are all going to work at improving until then.”