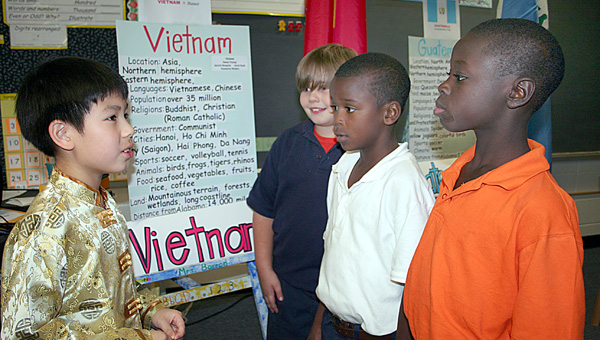 Danny Troung talks with his classmates about Vietnam during the 'international summit' held in Deb Davis' classroom on Friday. (Photo/Jaine Treadwell)

Troy Elementary School is not the most likely place to host an International Summit, but such an event was held Friday in Deb Davis’ third-grade class.

Six students in Davis’ class have other countries as their native homes.

“It’s unusual to have six international students in one class in rural Alabama,” Davis said. “So the International Summit was an opportunity for all the students to have a taste of the world. We are becoming international.”

The six international students were the group leaders and researched their country of origin and presented information about the country to other students and parents who attended the summit.

“This was a good learning experience for all the students,” Davis said. “Many of our students don’t get a chance to travel a lot so this was an opportunity for them to learn what the world is like outside Troy.

“The group leaders did a lot of work and learned a lot about their country in the process. All students learned about the different countries and the different cultures and about each other as well.”

Davis said the most interesting aspect of the unit was the realization that in reality “children are just children.”

“The children all get along so well,” she said. “It doesn’t matter to them which country they are from. They don’t even think about that.”

Amaila said she, too, likes living in America.

“In Guatemala the women carry water on their heads and their babies on their backs,” she said and added with a smile that “I couldn’t do that.”

Ayusha said that he’s an American and a true Southerner.