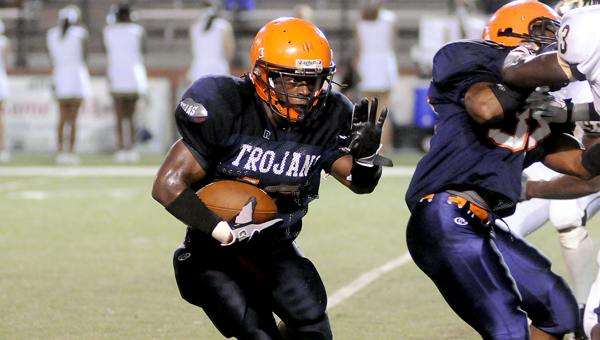 While the Charles Henderson Trojans may have walked off the field disappointed last Friday night after its loss to long rival Greenville, it has a chance to right the ship this week.

Even though the 35-21 defeat put the Trojans under .500 with its overall record at 2-3, it had no effect on the record that really matters – the region record, which is currently 1-2.

After suffering the loss, CHHS head coach Hugh Fountain said while his team wanted to beat the Tigers for personal reasons, one of the most critical games of the season would be the one following the game – Russell County.

Now, just two days before a must win region game, the Trojans look to get back on track, and in the process get back to .500 ball with both records, in what the coach called an “early playoff game.”

“This is a game, that with a win, we can control our own destiny,” Fountain said.

“I never want to put too much importance on any one game, but this is a big game for us.”

For the first time since the 2005 season, the Trojans and the Warriors will meet on the gridiron.

Before moving to 6A Region 3, RCHS was a region foe with CHHS in 5A Region 2.

The previous two meetings between the schools had very similar results, Trojan victories.

This will be the Warriors’ first trip to Troy since the 2005 season.

RCHS comes into the game with a 2-3 record, with its only wins against Carroll and Rehobeth.

This past week, the Warriors fell to Central 51-3 during the Phenix City team’s Homecoming game.

Warrior quarterbacks Darrie Miles and Bryan Flemming sat out of the game due to injuries, but Miles, the team’s starter, should be ready to go on Friday night.

“(RCHS) is coming off two tough losses,” Fountain said. “They have played some quality opponents already this season, just like us.

“We know a lot about them. We have film on them and from that film we have seen that they are a very athletic team all over the place.

“(Miles) can do a lot of things and he can throw the ball deep, probably better than anyone else in the region. But they are very much like the teams that we have seen the past four weeks,” the coach said.

One statistic that has proven to be a big factor in the final outcome of the Trojans’ games is the turnover margin.

With the team in need of a big win, Fountain said its going to come down to the leadership to help make sure the Trojans get the turnovers and make the plays necessary to win.

“I think our seniors have done a good job of stepping up for us this season,” the coach said.

“At this point in the season, we can’t afford costly mistakes,” he added.

Adding to the mix is a week that is awaited by almost all at CHHS – Homecoming.

Despite distractions all around, Fountain said his players are focused on the task at hand.

“Homecoming is always big at Charles Henderson. It’s always something that gets everyone around the school fired up.

“But everything culminates to Friday night at 7, it’s all about the football game. Our guys haven’t had any problem focusing though because they know what this week means for the season,” the coach said.

In the end, while the coach said he knows his players are aware of the significance of the upcoming game, he also knows of something else driving his team.

“We remember what last year felt like,” Fountain said. “The key for this game is to help ourselves out. It’s easier to do things by yourself than to rely on ours and a win would help us get that invitation to the dance.”

The Trojans will look to put themselves in position for a postseason birth with a win against the Warriors on Friday night at Veterans Memorial Stadium.

Kickoff is scheduled for 7 p.m